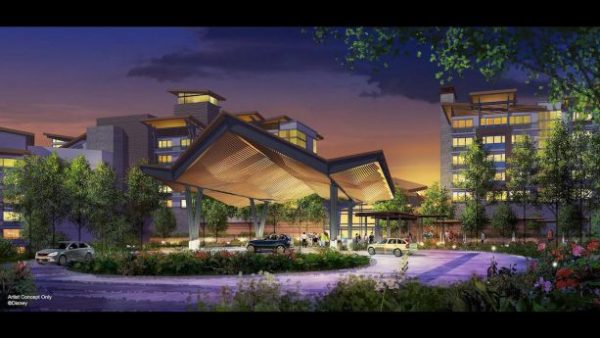 It appears that D23 has removed the plans for an upcoming Disney World Resort on their website.  Reflections – A Disney Lakeside Lodge is no longer featured on the website, which has many asking if the plans on hold or canceled.

NEW: Disney has updated its 2019 D23 Expo announcements blog post and removed Reflections – A Disney Lakeside Lodge. BEFORE and AFTER screenshots attached.

It's worth noting the original EPCOT plans that have since been modified are still in the post.https://t.co/uy25DWjo9M pic.twitter.com/juP9F7nw5g

While Disney has not confirmed the status on Reflections — A Disney Lakeside Lodge, we will continue to keep you updated with any further developments or announcements.

We first reported discussion in June about the possibility of the resort construction being halted. The rumor began when some local Disney fans noticed grass seed arriving to the site. They same people claim to have seen concrete and rebar being removed from the work site. Grass is typically added at the end of the construction and not during the middle of a construction project. It is also rather unusual if concrete and rebar are indeed removed. The DVC Lodge was currently in mid-construction earlier this year, so there’s question if the plans changed due to COVID-19. It would be unfortunate  if the economic effects of the pandemic resulted in the cancellation of a DVC property.

For those looking to learn more about the plans for Reflections— A Disney Lakeside Lodge, the deluxe resort was intended to house more than 900 rooms including DVC villas. It’s at the former site of Disney’s River Country, which was the very first waterpark at Walt Disney World. River Country opened in 1976 and closed permanently in 2005.

This hotel originally had an anticipated completion date for 2022.

We’ll see if any official news comes later about the resort status. If it continues at a later date, then the new resort will be nature-inspired and nestled in between the Wilderness Lodge and Fort Wilderness Resort & Campground. Terri Schultz, the Senior Vice President and General Manager of the Disney Vacation Club, stated, “ This resort experience will be a celebration of Walt Disney’s lifelong love and respect for nature, with some fun and even surprising accommodation types that families will find irresistible.”