Not long ago, I had the opportunity to chat with hidden Mickeys expert, author Steven M. Barrett. Steve and his family first fell under Mickey’s spell after visiting Walt Disney World Resort in 1980. Visiting twice yearly until relocating to the Orlando area in 1998, then hitting the Parks as often as possible, Steve gained so much expertise about the Resort that he found himself escorting visiting friends and relatives and offering better touring advice than any available guidebook. 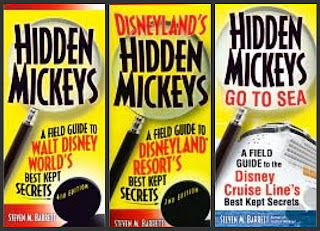 Welcome to Chip & Company, Steve, and thank you so much for joining us!

JW: What was it about Walt Disney World that first hooked you back in 1980?

Steve: I’d been to theme parks before, but Walt Disney World (WDW) was different! I was blown away by the sheer scope of the entertainment options and the amazing details of WDW’s construction. Just as Walt wanted, I was transported far away from the regular world “outside,” and I’d never experienced such stress relief before. Now I live not far from WDW, and I still feel that pleasant stress relief every time I visit!

JW: You enjoyed Walt Disney World so much that you vacationed there twice a year. Was your family as enamored with the Resort as you? Did anyone ever say, “Disney World again? Can’t we go somewhere else?”

Steve: My wife and son were amused by my sudden passion for visiting WDW. Thankfully, they enjoyed our WDW trips almost as much as I did, although they often ran out of steam before I did each day. I don’t recall my family ever asking me to vacation somewhere else, and I don’t remember family complaints after any of our WDW visits (other than being tired)!

JW: I imagine when that job opportunity arose in 1998, you did not hesitate to accept, huh? I don’t think my family would hesitate either! Are you still employed by that company, or are you now a Cast Member/employee of the Walt Disney Company?

Steve: I jumped at the chance to move to the Orlando area, and I haven’t once regretted that decision! I’ve changed jobs one time here in Florida, to allow more time to work on my Disney books and website. I don’t work for Disney.

JW: Part of the fun of visiting Disney Parks is searching for hidden Mickeys. Would you please take a moment to explain to our readers what a hidden Mickey is?

Steve: A hidden Mickey (HM) is a partial or complete image of Mickey Mouse that is purposefully hidden by Disney Imagineers and artists in the designs of Disney attractions, shops, etc., or anywhere on Disney property. Other Disney characters can be hidden as well.

JW: A Magical Mouse Schoolhouse reader, Amy, asked: What is the difference between hidden Mickeys and décor Mickeys? Are all of them intentionally hidden, or are some just part of the design?

Steve: Hidden Mickeys are designed to blend into their surroundings, so that they’re usually difficult to spot. Décor (decorative) Mickeys are not designed to be hidden but instead are easily visible to everyone as part of Disney’s theming. However, sometimes it’s difficult to distinguish a Mickey image as hidden or décor. You can often sense that a certain hidden Mickey image is purposeful; these are the images I like best. Some images may not be purposeful. For example, many collections of circles (pumpkins, bubbles, oranges, grapes, etc.) can be found on Disney property. Some of these circles may come together at times to form proportional and properly positioned classic (three-circle) Mickeys. I may accept some of these images as hidden Mickeys even though they might not be intentional, or I may ask folks to vote on the images on my website.

JW: At what point did you think to record all the hidden Mickey locations in a book?

Steve: As part of my Disney research in the 1990s, I collected Hidden Mickey sightings as described by Cast Members, the (now defunct) Disney Magazine, and other sources. My publisher asked if I could arrange the hidden Mickeys in a touring plan format for a book, so that the guest could explore the Magic Kingdom (or any other Park or area) for hidden Mickeys in an efficient manner, with minimal waits in line. The hidden Mickeys books are written in a scavenger hunt format, with the hidden Mickeys arranged for efficiency.

JW: Did you have to get permission from Disney to expose the hidden Mickey locations?

JW: I consider you an expert in the realm of hidden Mickey knowledge. Does Disney? Do they contact you to let you know about new ones, or do you just have to discover them on your own?

Steve: Disney doesn’t contact me about hidden Mickeys, so I must find them on my own. However, so many folks find hidden Mickeys and write to me about them that I don’t have to rely on my own searches as much anymore.

JW: A fan, Mel, asked: Are there new hidden Mickeys added on a regular basis? If so, are they just added to new attractions or to existing ones too?

JW: Since new ones do show up periodically, how frequently do you update your Hidden Mickeys books?

Steve: Over the years, I’ve become aware that hidden Mickeys appear and are lost at a fairly steady pace. Because of this predictable volume of new and lost HMs, it’s worthwhile to publish new editions of the WDW and DL books every two years. Sometimes, if changes occur more rapidly, my publisher can make small changes or additions to books as new batches of the current edition are reprinted during the year.

JW: Your books are pretty comprehensive! Do you think any HMs elude you?

Steve: Because of the many hidden Mickey hunters that write to me, I believe that few HMs elude me. I only include hidden Mickeys in the books (and, in general, on the website) that Guests can spot during their usual touring. I don’t include behind the scenes HMs in the books. A few hidden Mickeys probably exist that I can’t spot while on certain attractions. For example, Cast Members say that a Hidden Mickey is on the forehead of the first carnotaurus you encounter while riding DINOSAUR in Disney’s Animal Kingdom. However, I’ve not yet been able to spot or photograph this HM while on the ride. Maybe you can see it if the ride breaks down! So I don’t include it in the book.

JW: A fan, Amy, asked: Are there any hidden Mickeys on the Sorcerer’s hat at Disney’s Hollywood Studios? Are there any on Cinderella Castle at Magic Kingdom?

Steve: The only hidden Mickeys I’m aware of in either location are inside Cinderella Castle Suite, one each on the rear wall and the right wall bathroom murals. An image in the Castle Suite fireplace doesn’t look like a hidden Mickey to me (this image is typically called “wishful thinking”).

JW: My teenage son, Kyle, would like to know: What do you think is the best-hidden Mickey at Walt Disney World? Which one, in your opinion, is the hardest to spot?

Steve: My best answer is my current favorite hidden Mickey at WDW: the Steamboat Willie Mickey image behind the fern in the left side mural at Garden Grill Restaurant in Epcot’s Land Pavilion. It’s almost a hologram-type effect, and some folks can’t see it. It took my wife almost a year before she finally spotted this Mickey; she saw it (“Eureka!”) in a close-up photo on my computer screen!

JW: Tell Vickie I can’t find it either! But I did find this photo of Hidden Mickey cucumbers served at the Garden Grill.

JW: A reader, Michelle, asked: How are you supposed to find hidden Mickey’s when you are on the rides? I can’t seem to find them that fast. Do you have any tips?

Steve: It depends on the ride. The Great Movie Ride vehicle moves at a pace at which you can spot the great HMs in this attraction. On Test Track, you have to know beforehand exactly where to look to find the HMs. Before I enter an attraction, I memorize as many HM locations as I can to optimize my chances. Still, I had to ride Test Track many times before I spotted the Hidden Mickeys I was verifying. On any attraction, you must know when and where to cast your eyes to locate the HMs. In my books and website, I use the most accurate and specific descriptions possible to help Guests find the little gems!

JW: I live in Texas, so I don’t get to visit the Parks very often. To help us feel like we’re onsite, sometimes my kids and I find unofficial hidden Mickeys around our home. Do you find yourself spotting them when you’re not on Disney property (like Mickey-shaped clouds or bubbles stuck together or garage bolts in such close proximity that they resemble Mickey—yeah, some of ours are wishful thinking too)?

Steve: Yes, I see Mickeys all around me, and I subconsciously look for Mickey images all the time, wherever I happen to be. I have a section on my website, the “Questionable Hidden Mickeys – Other” section, in which I post convincing images that folks find outside of Disney property. Mickey is everywhere!

JW: Before we close, do you have any special advice to offer our readers regarding visiting Disney Parks or discovering hidden Mickeys?

Steve: Plan ahead and don’t wait in any long lines (more than 20 minutes) unless you don’t have a choice. Drink plenty of water and take breaks when your body tells you to! Don’t expect to do everything. Stay alert wherever you are on Disney property. Admire the amazing Disney details and chat periodically with Cast Members. In fact, ask Cast Members about hidden Mickeys in their areas, although keep in mind that not all Cast Members (especially newer ones) are interested in or informed about hidden Mickeys. I know that’s hard to believe, but it’s true!

With the holidays in full swing and the Parks decked to the hilt, I had one more question to ask Steve.

JW: Where should we look for hidden Mickeys in the Christmas decorations?

Steve: During the Christmas holiday season, hidden Mickeys (and decor Mickeys) appear in the gingerbread displays at the various Disney resorts, in the Osborne Family Spectacle of Dancing Lights, and in decorations and some Christmas trees around the parks. Also look for the hidden Mickey on the nutcracker figure who walks around Epcot’s Germany Pavilion. Steve, thank you so much for spending some time with us! I know I’m now ready to hit the Parks with a new passion!

You can find more information about hidden Mickeys, Steve, and his books at HiddenMickeysGuy.com.

A previous version of this interview originally appeared at Magical Mouse Schoolhouse.