Okay, so you’re a Disney newbie. What should you expect when you get there?  If you’re coming from up North, don’t expect wide verandas and southern belles. Culturally, Orlando has a little bit of everything, but it’s not really Southern, although you can get good barbecue and sweet tea.  Here’s a quick run-down on the area for first time guests.

The Airport. You’ll likely fly into the Orlando International Airport (MCO). Some vacationers choose the smaller Sanford Airport, about an hour from Disney World, to save money, but if you choose this option  don’t forget to add in the cost of transportation to and from the airport, as it isn’t serviced by Magical Express.  The main part of MCO is designed like a big rectangle with monorail lines out to the four terminals located at each corner of the rectangle.  Shopping, a hotel, full-service restaurants, the baggage claim area, and the oh-so-important Magical Express are all located in the main part of the airport.  Disney travelers make up a big part of this airport’s business so conveniently, you’ll see signs for Magical Express everywhere.

Weather and Geography: I’ll admit, this is probably an obvious one. It’s hot.  And it’s humid. And it rains frequently during the summer. But the winter can be all over the place: Hot one day, cold the next. Chances are you’ll experience some of the nicest weather the region has to offer during this time, but last January, it actually snowed, so be prepared. I always tell people who are visiting Orlando during the late fall through the early spring to bring a waterproof coat with a liner that zips out, that way you can use them together or alone.  This is particularly true for children who will be outside at night.

Newcomers are often surprised by how much water there is in Central Florida.  There are literally small ponds and lakes everywhere, which can be very pretty but dangerous.  If you’re renting a house and you have small children, you’ll want to take note of any bodies of water near the house; people are often surprised to find small ponds just a few yards from the back of the house.  Sadly, every year several people in Central Florida drown when they drive into those ponds, many of which are right next to roads. This has even happened on  Disney property, so be extra careful, especially on days when it rains heavily and you may have trouble seeing the road.

Swimming in lakes should be avoided.  Part of this is due to the presence of snakes and the alligators.  I mean no one wants to run into a gator, right?  But it’s these three little words that should really worry you:  Brain eating amoebas! I’m not making this up. Apparently these little critters live in fresh water when it sits stagnant at over 80 degrees Fahrenheit.  If you ingest them, it can lead to sickness or even death. Yes, people do swim in these lakes, but it’s not worth ruining your trip over to take the chance.  If you want to experience swimming in local fresh water, try some of the nearby state parks that have beautiful clear springs for swimming and boating. These pristine swimming holes are popular with locals and stay around 70 degrees during the summer, making them a nice alternative to the theme parks on a hot day.

Culture:   Florida, as a state, is a mix of many things:  Part southern in the northern part of the state, part melting pot everywhere, expect to meet people from all over the country and the world.  In Orlando you’ll encounter more newcomers than true locals.  As the number one travel destination in the world, this small city has seen every race, religion and background.  You’ll see people of great wealth and those with almost nothing, just on International Drive.  You can find just about any type of food although it might not be exactly like it is back home (bagels, pizza).  Downtown Orlando has several interesting museums and neighborhoods like Little Saigon and Little Brazil, which have inexpensive ethnic food and shops.  The area is, overall, very friendly and worth the trip from the theme parks.

Driving: I-4, the main highway running through the Orlando/Disney World area experiences some congestion in the stretch that goes through Orlando itself. Other than rush hour traffic, the rest of I-4 in this moves at a good pace.  Don’t expect Los Angeles style drivers–the speed limit on I-4 is a low of 50 MPH in downtown and as high as 65 near some of the attractions.  Major roads near the attractions are congested on the weekends, particularly International Drive.  Disney roads are rarely congested with the exception of the Downtown Disney area. 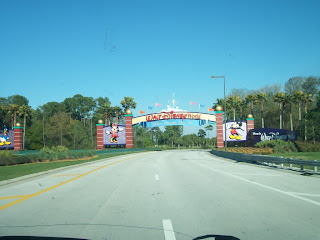 One interesting quirk I’ve found is that if you ask  locals how to go to Disney World from the airport, they’ll likely tell you a way that avoids tolls. This is very thoughtful, but for a first timer it can be confusing. Make sure the directions you get are the ones that use the main roads. 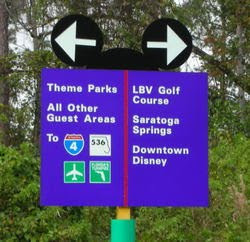 Fortunately, it’s very difficult to actually stay lost because those signs are just about everywhere.  It helps to know where your resort is located in relation to the theme parks or Downtown Disney, since many signs will point you toward the theme parks (or “Epcot Area Resorts,” for example)  first and then to the specific resorts.

Tolls:  First timers are often surprised by the many toll roads around Orlando. If you’ll be driving, don’t forget to bring change. The fines are pretty steep if you don’t pay. I’m embarrassed to tell you how many times I’ve sat at a toll booth, caught without change, only to have some kind person come up behind me and toss the .35 cents into the basket.  Let’s just say I’ve learned my lesson.  I hope.

Gas:  Orlando gas prices tend to stay very close to the national average. The exception is at gas stations near the airport, where price gauging has reached a whole new level of arrogance.  In recent months, Orlando officials have called for ordinances which require all gas stations to post prices so that drivers can see before they pull into the station, but that doesn’t keep them from charging nearly double for gas and taking advantage of tourists who are in a hurry to meet their plane and don’t know the area very well.

Surprisingly, some of the least expensive gas in the area can be purchased at the three Hess Marts on Disney property. They are at the Car Care Center next to the Magic Kingdom parking lot; Downtown Disney; and near the Boardwalk Resort.  You can also buy soft drinks and other items for considerably less than at your resort gift shop.

Internet: While many large hotels in the surrounding Disney resort area have free internet, Disney does not (with the exception of free internet for Disney Vacation Club owners at DVC resorts). You’ll need to pay around $10 for 24 hours of internet service in your resort room. There is very little free WiFi on Disney property. It’s essentially non-existent in the parks.  You can purchase 24-hours of WiFi for use in the lobbies on the Contemporary, Coronado Springs, the Yacht and Beach Club, and the Grand Floridian.  It costs $9.95.  This thread on Disboards explains everything guests need to know about internet use on Disney property.

Groceries:   Hotel gift shops have a limited amount of merchandise and it’s usually quite expensive. If you don’t have a vehicle, try Garden Grocer. They’ll deliver right to your resort.  I also like WeGoShop, which will do your shopping for you for a small fee.  The Disney resort area has many of the same stores you’re used to at home. There’s a Whole Foods near SeaWorld, a Super Target just off property and numerous Walmart stores. I find that the Super Target on Highway 192 has the best selection and prices.  For locations and more information, please see this post.

Wildlife:  We probably should talk about these guys: 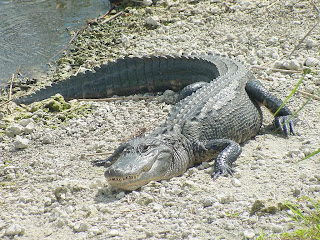 It’s true that they’re everywhere in Central Florida, even showing up on Disney property, but it’s rare that you’ll actually see one.  Avoid swimming in lakes and challenging one to a wrestling match. Gators are notoriously crooked and like to fight dirty.  Lesson:  Don’t trust a gator.

Not only have I never seen a gator on Disney property, I’ve never seen a snake, which are known to appear from time to time and inspire fun threads on Disney message boards.  I have however, seen ducks and squirrels parading around the parks and resorts, as well as lizards, the odd deer, innocuous possums, the dreaded and aptly-named Lovebugs, and the occasional cockroach.

The best advice anyone can give regarding local wildlife is probably what you do at home: Avoid it.  Except those cockroaches.  Do with them what you will.