Skip to content
Please note: some posts may contain affiliate links which means our team could earn money if you purchase products from our site
Well, this hardly seems fair.  Comparing the Grand Floridian with little ole’ Pop Century?  Well hear me out.  Sure the  Grand is a great resort, but there are some very nice reasons (including tangible, in your pocket reasons) why Pop Century might just be a better resort.  Let’s look at the advantages of both.

Cost: A full-price standard room at the Grand Floridian will cost about four times what a standard full-price room at Pop costs. Kind of staggering when you put it down in writing, isn’t it?

Advantage: No question, Pop is a better deal no matter how creative your math when you explain it to your spouse. And believe me, I can get pretty creative.

Amenities:  All Disney resorts have great theming; it’s what sets them apart from off site hotels.  But some have better amenities than others.  If you’re wondering what pools your kids will prefer, Pop wins with fun, lively kid-friendly pools. 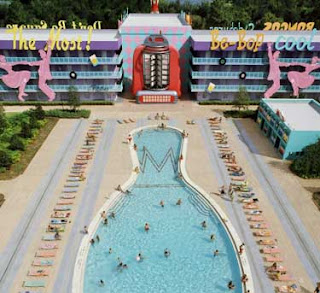 On the other hand, for adults travelling without children, the Grand wins hands down with some of the most quiet, elegant pools on property.  You can also rent a cabana for a day or half day at the Grand  Floridian and hang out in your own private space.  And while it comes with a fairly high price tag, the Grand Floridian has a spa where you can also get a poolside massage.  There’s also a beach and cabanas for relaxing. 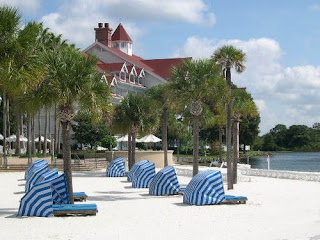 For me, deciding where to eat is a big part of planning a WDW vacation.  I want variety and easy access to good food.  With four table-service restaurants on site, including the top rated restaurant in Central Florida, Victoria and Albert’s, the Grand Floridian outshines Pop, which has no sit-down restaurants.   For a casual meal however, I think Pop’s food court beats  the  Grand every time, as its has really excellent variety and quality.  The quick service location at the Grand is slightly worse than what you would find in a mall food court, but you are a short monorail ride away from the Contemporary Resort and the Polynesian, both of which offer better quick service meals. 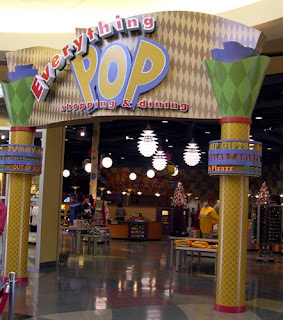 The first time you walk into the Grand Floridian you’re bound to be just a little bit awed.  The lobby is really extraordinary, the best on Disney property in my opinion. You could easily pass a couple of hours sitting there, just people watching and soaking up the atmosphere.   An orchestra plays there daily.  Yes, I said an orchestra. 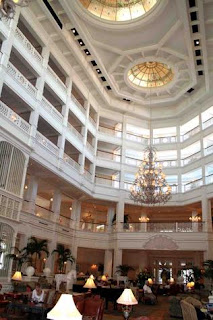 Pop, on the other hand, has a small but lively little lobby decorated with memorabilia from the latter part of the 20th century. 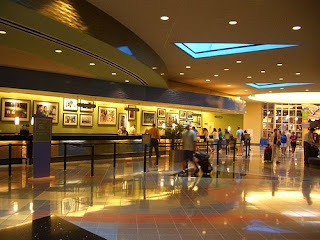 Notice how shiny it looks?  Yes, it’s that clean.

What really sets the Grand apart from Pop is that it’s on the monorail. When you stay at the Grand Floridian, you’re just a couple of minutes away from the Magic Kingdom.  This is a huge advantage if you’re planning on taking a break during the afternoon.  Should you tire of the monorail, there’s always boat access to the Magic Kingdom.  Of course, you’re just a few minutes away from the Ticket and Transportation Center and a monorail transfer to Epcot.

Advantage:  The Grand Floridian.  It’s beautiful, on the monorail, has four table service restaurants, and a gorgeous lobby. The grounds are amazing enough that even non-guests schedule photo shoots there.

Rooms: At around 260 squre feet, Pop’s rooms are small, the kind of rooms that bring new meaning to the term  “family togetherness.”   Fearturing two double beds, a TV with stand, and a small table and two chairs, Pop’s rooms have very little theming other than a couple of framed collages representing the building’s decade and a Disney themed border on the walls. The rooms at the Grand Floridian are, not surprisingly, far roomier with two queen sized beds, a desk and chair, a large TV armoire, and a daybed. There’s also a balcony.  While Pop’s decor is very basic but upbeat, rooms at the Grand are airy with subtle, feminine patterns and furniture.

What about bathrooms and closets?  At Pop you get a small rod and shelf right next to the sink for a closet as opposed to an actual roomy closet at the Grand Floridian. Bathrooms at the Grand Floridian are spacious and pretty, with a separate sink/dressing area and a shower/bath combination and toilet in its own room. The bathrooms at Pop are tiny; in fact, it’s one of the biggest complaints about Pop. The small sink area is in the actual room, with the toilet and tub occupying the actual bathroom, which is so small that it requires a bigt of  gymnastics to actually close the door. There have been complaints about soundproofing, but I can’t personally confirm this as I slept like a rock during my stay there.

I found both resorts to be equally clean and well-maintained, both the rooms and the common areas.

Advantage: Well, okay. This is getting unfair. Of course the Grand’s rooms are better.  Next!

Customer Service: If you’re staying at a deluxe resort because you think the service is better than at a value, save your money. From my experience, cast members at all Disney resorts are stellar, regardless of the level. It’s true that the Grand Floridian has a higher number of cast members per guest than does Pop, but I didn’t feel that effected the level of service I received. Keep in mind that we didn’t require anything special during our stay, nor did we have any emergencies, so I can’t speak to how my interactions with cast members might have been under special circumstances, but for the normal guest experience, both resorts were great. In both cases, I arrived at MCO in 9:00 in the morning and was in the Magic Kingdom by 11:00, which is pretty impressive given that it’s a longer ride from Pop than it is to ride the monorail from the Grand Floridian. In truth, I might have gotten to the Magic Kingdom from the Grand sooner if I hadn’t been gawking. It’s such a beautiful hotel.

Advantage:Tie, with a slight advantage to Pop for trying harder like an awkward, funny girl at a Sadie Hawkin’s dance.

Grounds/Atmosphere: I don’t think Disney resorts really photograph as beautiful as they are. You miss out on the scale and the full experience.  The Grand looks stuffy and old fashioned, when in fact the buildings feel very light and airy. It’s also not as feminine as you might think from the photographs.

Pop, bless it’s heart, looks garish in photographs. And to a degree, it is, but that’s really the whole point. The atmosphere is a both a bit frenetic and nostalgic, meant to be evocative of the old roadside motels that you might have stayed in as a kid on the way to Disney World. But unlike those old motels, the grounds are beautifully maintained, the pools are clean, and the common areas are nice. I love the lobby at Pop. It’s a bit more subdued than the rest of the resort but it’s still fun and the memorabilia is fun to look at. Pop has a great feeling, full of families and couples having a good time. There’s a great energy to the place that I don’t find at any other resort. I know a number of people who don’t feel comfortable at the Grand Floridian, but I think that’s mainly an internal thing.  I honestly haven’t seen a huge difference in the guests from values versus deluxe resorts; everyone is sporting a kind of resort casual look that gradually gets more rumpled as the day goes on.  And certainly the casts members are no less friendly at the Grand as they are at Pop.  You’ll be treated just as well if you come into the Grand Floridian in a t-shirt as you will if you’re dressed to the nines.

What about for families travelling with kids?  All Disney resorts are kid friendly, but in my experience, the Grand Floridian seems to attract more adult guests than children.   That’s not to say that there aren’t lots of activities for children at the Grand Floridian and that there aren’t plenty of kids.   But comparatively speaking, particularly when contrasted with the  All Stars or Pop,  it’s just a more “grown-up” resort.   One reason is that its popular with couples celebrating honeymoons and other special occasions.   It’s also wedding central, with the Wedding Pavilion and reception areas located at the resort.  If you’re looking for a relatively quiet, romantic hotel on Disney property, the Grand Floridian is it.

Advantage:  Tie.  Both are nice-looking resorts.  It depends on your tastes.

Summary. Okay, obviously, a comparison between Pop and the Grand isn’t entirely fair. The Grand Floridian is Disney’s flagship hotel. Pop, while loved by many, is a value resort. But look at it this way: You can go to Disney World at lot more often and for a longer amount of time if you stay at Pop. Sure, the room is smaller. And it’s not on the monorail.  You have to decide how important theming and convenience is to you, but if you’re juggling costs and trying to figure out how to make a Disney vacation work, Pop is a great option.  You certainly shouldn’t feel that you’re missing out on something because you stay at  Pop instead of a deluxe hotel.