This past May I went to Disney World with my best friend on a girls only weekend.  It was a spur of the moment trip and it needed to be cheap, so I booked a room at Pop Century. Now, I’ll be honest:  There are truly no “cheap” Disney resorts, but there are those that are less expensive than others and Pop, which falls into the value resort category, is one of them.  Low season value rates start at around $89 a night, but you can find lower rates by using the ever so elusive pin codes (special discount codes that Disney mails out to certain customers who sign up with through the official Disney website), annual pass holder discounts, or various other discounts available to the general public.  Sites like Mousesavers regularly post discounts, so if you’re looking for a bargain, check there first.  Disboards has a great sub-forum on their resort board where posters regularly discounts rates.  It’s definintely worth a look.  You can also check with a travel agent.  They don’t charge you more but have access to discounts that can save you money.   Bottom line, it doesn’t hurt to look both on your own and with an agent.  Our room cost $130 a night, including tax.  By the way, taxes in Florida are high–plan on 12.5 percent being tacked onto your room rate.

I have to admit: I was a little wary about Pop.  Although I’d seen good reviews on Disney travel websites like Passporter and Disboards, I’d also seen plenty of reviews from disappointed guests.  Disney’s value resorts seem to inspire a lot of fear in first-timers and with good reason: If your only experience with a value accommodation in Orlando is off Disney property, you’ve probably encountered some scary places.  In fact, the idea of staying at a “value” hotel anywhere probably inspires at least some trepidation.  Most of the complaints are that the resort was crowded, had transportation issues, and that the rooms were too small.  For me, there was also this little issue of the decor:  I thought it was ugly. 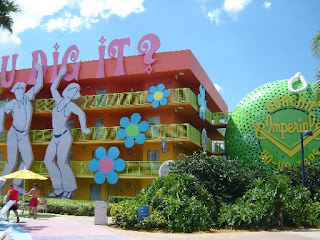 If you’re looking for subtlety in theming or a romantic setting, you’ll want to keep on looking:  Pop is intentionally kitschey.  It’s a throwback to the roadside motels of the 1940s and 50s, only a bigger, technicolor version.  If you’re looking for a clean, safe place to stay that gives you all the benefits of staying on Disney property without spending a lot of money, Pop might just be the place for you.  So, here are the basics:

Keep in mind that this was a moderately busy weekend in May, so obviously resort check-in and the lines for the buses may be slower during the summer or holidays, but we didn’t wait at all for the Magical Express bus from the airport to the resort.  The bus was about half-full and it stopped at one other resort before we reached Pop and that drop-off was pretty quick.  I’d heard some bad stories about the buses from Pop to the parks and back, but we didn’t encounter any problems.  The bus to Disney Hollywood Studios took about 15 minutes on Saturday morning during Extra Magic Hours; buses to the Magic Kingdom took about a half hour or so.  The longest I waited for a bus the entire weekend was maybe fifteen minutes.

One downside, however, is that the bus stops at Pop are not covered. Not a big deal when it’s not raining or during the cooler months of the year, but downright unpleasant even on a not-so-sunny morning in May. A surprising oversight, given that other resorts have covered stops.

Verdict:  Overall, transportation wasn’t a problem in the least. A pleasant surprise.

The lobby is clean and bright. One thing that surprised me was how much I enjoyed the “theming” of the lobby.  It’s filled with memorobilia from the 50s through the 90s and it was fun to look around while we waited.  Pop is a very kid-friendly resort and there are several little areas where kids can amuse themselves while their parents are checking in.  There is a combination gift shop (selling just about everything you’ll ever need) and a food court which gets pretty good reviews, just past the lobby, as well as a game room for older kids.

While deluxe and moderate Disney resorts seem to be “themed” for grown-ups, Pop is a resort designed for kids.  You can see that in the resort’s pools, decor, and in the families who go there. Pop is full of kids. It wasn’t any louder than other Disney resorts, but it did have a different energy than a place like the Grand Floridian or Boardwalk, both of which lend themselves to a more quiet, relaxing getaway than the value resorts. Outside, Pop is decorated with huge icons of the decades from the 50s through the 90s.  Our building, the 1970s had 8-Track tape stairwells with funny “songs” and different phrases from the 70s; for some reason, every time we saw the life-sized “hot pants” sign on our building, we cracked up.  Okay, maybe it wasn’t that funny.  But Pop is cute.  The inexplicably famous tie-dyed cheesecake sold in the food court? Okay, that was disgusting. But to each his or her own.

Verdict:  Pop is a happy, retro nod to the roadside hotels you’re probably too young to remember.

The rooms at Pop Century are on the small side.  Think slightly smaller than your average room at say, a Holiday Inn or Marriott.  The rooms, which are accessed from the outside, have two double beds, a small table and two chairs, and a television.  There is one sink and a very small vanity. The bathroom, which includes a toilet and a tub/shower combo, is small enough make it slightly awkward going in and out.  Still, it’s very clean and cute and, when compared to the theming of the public areas, not over the top.  I didn’t have any issues with noise, although I tend to sleep like a rock after a day in the parks, so I probably can’t give an entirely honest assessment of the noise level, but my best friend said she only heard one thing during the night.  The lighting was good, the linens clean, and the beds comfortable.

One caveat: The rooms are small enough that if you’re staying there with more than one child, you might want to consider renting two adjoining rooms. I can’t imagine a family of four staying in one room at Pop for a week, although people do it all the time.

Verdict:  I loved Pop and was really pleased with my stay there. I’d recommend it to anyone.