You will haunt the Magic Kingdom for eternity in this limited edition MagicBand 2 celebrating the Park’s 45th Anniversary. With a simple touch, redeem FastPass+ selections, enter parks, charge purchases to your room, and more! 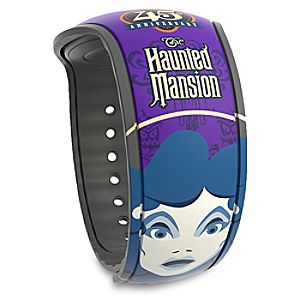 Like the “It’s a Small World” MagicBand released in December, this band is expected to have an edition size of 2,500. The new band is purple, with a cartoony image of Madame Leota on one side, and the stylized “The Magic Kingdom” logo for the 45th anniversary.

This band is also expected to have special effects at MagicBand checkpoints at The Magic Kingdom, like the previously released It’s a Small World band.

So what do you think do you like the new design? Let us know in the comment box below…

Don’t forget to take advantage of the Disney Store Friends & Family Sale which is going on now!

Danielle is the Merchandise Specialist at Chip and Co. Danielle was born and raised in Sunny South Florida just a short drive south of Walt Disney World. She is proud to be a nerdy mommy and Disney Store Cast Member! She is also a self-proclaimed part-time Disney Princess by day while being a stylish Disney Villain by night. Be sure to follow her Disney adventures on Instagram
View All Posts
Follow Me :

New Pandora The World Of Avatar Merch Now At Animal Kingdom And ShopDisney!