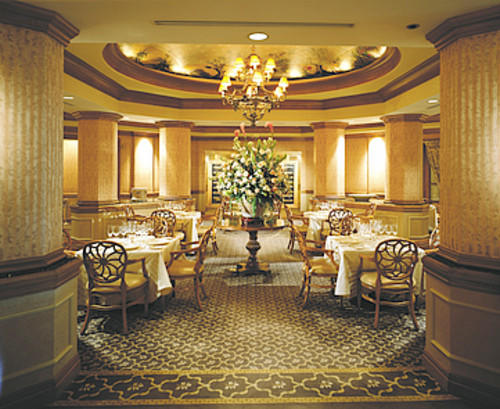 The Walt Disney World Resort’s restaurant, Victoria & Albert’s has been named Orlando’s most iconic restaurant by Zagat. Zagat just released a new list of fifteen U.S. restaurants that “embody the essence of their city.”

Zagat included this review of Victoria & Albert’s, “A ‘once-in-a-lifetime experience,’ this Grand Floridian ‘celebration destination’ earns ‘superlatives all around,’ from chef Scott Hunnel’s ‘exquisite,’ ‘beautifully presented’ New American prix fixes to ‘impeccable’ service — and an ‘über-romantic, high-end’ setting where ‘elegance rules’ (jackets are required for men); you may ‘need to hock one of your kids’ to pay, but those ‘trying to impress’ say there’s ‘no finer place.'”

Orlando Sentinel Food Critic Heather McPherson says “Hunnel’s creative genius, along with one of the great chef’s table experiences in Central Florida, an impeccable service staff and an exemplary food and beverage pairing program, has made V&A a crown jewel in the local dining scene.”

Victoria & Albert’s is found in Disney’s Grand Floridian Resort & Spa, one of the deluxe resorts at the Walt Disney World Resort. It is classified as a “fine/signature dining” experience. The price tag on these meals reflects these awards and recognition though as Disney classifies it as a “$$$$” restaurant, averaging over $60 per adult meal. Victoria & Albert’s offers 7 prix fixe courses in the Dining Room, 10 in Queen Victoria’s Room or 10 at the Chef’s Table as well as an award-winning wine collection. The menu changes daily and guests are required to follow a formal dress code.

Have you ever dined at Victoria & Albert’s? Was it worth every penny?

Would you like to try a meal at Victoria & Albert’s or just check it out on your next Disney World vacation? Siera, an agent with Destinations in Florida, can help you plan the vacation of your dreams!

Let our friends at Destinations to Travel help you book your next Disney Vacation. They are the preferred Travel Agency of Chip and Company and Disney Addicts, and who we use ourselves.

Chip and Co Past Writers and Friends 18,198 Posts