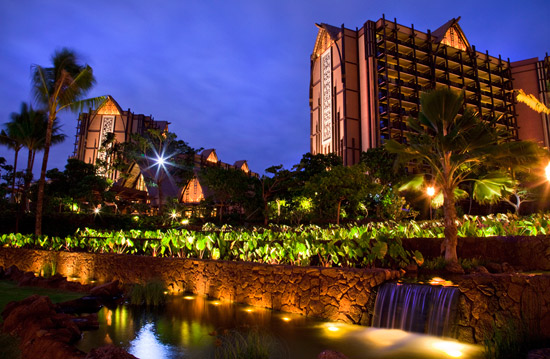 Come celebrate the grand opening of Aulani, a Disney Resort & Spa in Hawai`i, with a new special offer! Beginning today through December 16, 2011, guests who purchase a consecutive four-night stay at Aulani will receive a fifth night free*. Take advantage of this grand opening offer at Aulani.com or by calling (866) 411-3883 and mentioning offer code Y5J.

Take a look at some of the fun, relaxation and magic you can experience at Aulani:

*5th Night Free promotion for guests who stay four consecutive nights between November 27, 2011, and December 16, 2011; January 4, 2012, and January 12, 2012; January 16, 2012, and January 25, 2012. Book by December 16, 2011. The number of rooms allocated for this offer is limited. Excludes Resort fees and taxes. Not valid in combination with any other discounts or offers. Offer excludes suites and 3-Bedroom Grand Villas. Additional per adult charges may apply if more than 2 adults per room. Offer applied once per reservation and not valid for previously booked rooms. Check for offers for other lengths of stay. Advance reservations required. Subject to restrictions and change without notice. Limit 2 rooms per reservation.

One thought on “Aulani, a Disney Resort & Spa, Announces a Special Offer to Celebrate its Grand Opening”